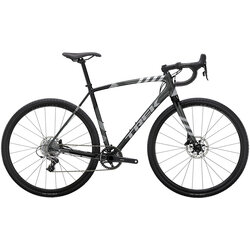 Trek Crockett 5 Disc
$2,429.99
Crockett 5 Disc is the perfect high-value cyclocross companion. It's designed with cross-specific details, like a 1x11 drivetrain and a lightweight frame that's easy to carry over barriers, but it's so much more than just a cyclocross bike. The advanced alloy frame looks and handles like carbon, and it's equally at home on gravel and your morning commute as it is on the cross course. It's right for you if... You're rolling into the cyclocross scene and looking for a ride that's everything you need and nothing you don't. Or, you're looking for a great all-around dropbar bike that's perfectly suited for everything from cyclocross races and gravel roads to commutes and rail trails. The tech you get A lightweight and strong 300 Series Alpha Aluminum frame with shaped tubes, Invisible Weld Technology, 12mm thru axles, a Trek Cross full carbon fork, powerful flat-mount hydraulic disc brakes, tubeless ready rims, and the simplicity of a 1x11 drivetrain with SRAM Rival shifter and derailleur. The final word Crockett 5 Disc is a race-ready cyclocross bike with an advanced alloy frame, but it's a lot more than that, too. Whether you're gearing for a cyclocross season or want a versatile bike that stands up to the rigors of the burliest gravel roads and commutes, Crockett truly does it all. Why you'll love it - Carbon looks and handling, alloy price point: Invisible Weld Technology and shaped tubes for sleek looks, light weight, and incredible handling - The full carbon Trek Cross fork soaks up the chatter from rough roads, gravel, and cyclocross courses - Internal cable routing with Control Freak Cable Management keeps things smooth, quiet, and clean 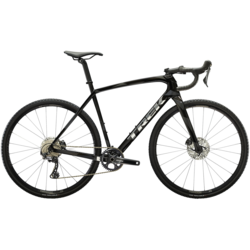 Trek Boone 6 Disc
$4,029.99
Boone 6 Disc is a carbon cyclocross race bike that's built for crushing any CX course—even the most legendary on the UCI circuit. The sleek, lightweight carbon frame has terrain-smoothing Rear IsoSpeed and is trimmed with parts that perform in any conditions, like a robust GRX drivetrain, vibration-absorbing handlebar, and powerful disc brakes that deliver stopping power on bumpy, muddy terrain. It's right for you if... Your happy place is in mid-air bunny hopping over barriers, and you race every course in pursuit of that top spot on the podium. You want a high-end CX race bike designed to help you get there and look great doing it. The tech you get A svelte, ultra-lightweight 600 Series OCLV Carbon frame with Rear IsoSpeed for comfort and traction, hidden cable routing for added protection from the elements, a Trek IsoSpeed Cross carbon fork, 1x11 Shimano GRX drivetrain, Bontrager Elite IsoZone handlebar, and powerful flat-mount hydraulic disc brakes that provide precision stopping power in even the messiest conditions. The final word If you love crushing frites almost as much as crushing flyovers, Boone's the bike for you. It's made for pure speed and podium-topping performance on every section of course, in any conditions. Why you'll love it - Shimano GRX is designed specifically for rough rides—you get great chain retention and a better grip on the hoods and levers - This bike was designed with input from cyclocross royalty, including World Champion Sven Nys and U.S. National Champ Katie Compton - Rear IsoSpeed cuts down on the fatiguing impacts of rough courses and increases compliance, giving you more traction when it matters - Boone's cross-specific geometry and tube shapes make shouldering easy so you can dominate all aspects of a race, including run-ups - Carbon rules on the cross course—it's lighter, more forgiving, and more efficient than aluminum 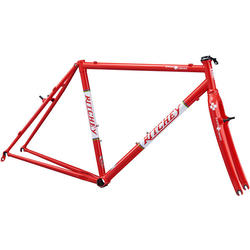 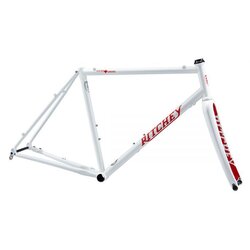